A NEW ZEALAND LINK TO THE CHELSEA FLOWER SHOW

A national science collaboration, Better Border Biosecurity (B3), that involves four New Zealand Crown Research Institutes and Lincoln University, will play a small but important part in showcasing the biosecurity expertise of scientists to gardeners of the world.

The world-famous Chelsea Flower Show (May 19-23) is hosting an exhibit called ‘Beyond our borders’ that highlights how sentinel trees are being used to detect plant pest and disease threats across the world through the International Plant Sentinel Network (IPSN) (www.plantsentinel.org/). The IPSN is co-ordinated by Botanic Gardens Conservations International (BGCI), led by Fera and funded by the UK’s Department for Environment, Food and Rural Affairs through the European Phytosanitary Research Coordination (EUPHRESCO).

Nigel Bell, B3 project leader for the sentinel plants project, and the AgResearch Soil Biology team leader, is the New Zealand co-ordinator for the IPSN. The developing network consists of contributing global organisations whose aim is to provide an early warning system for new and emerging pest and pathogen risks. In New Zealand B3 researchers from AgR, Scion, Plant and Food Research and Landcare Research are contributing research to this project, alongside staff from Botanic Gardens, particularly in Christchurch and Auckland.

One of the ways the IPSN is doing this is by monitoring plants outside of their natural ranges to act as sentinels and provide an early warning system for new and emerging plant pests and diseases. By monitoring sentinel plants in botanic gardens and arboreta for damage by organisms native to that country the IPSN can provide key information to plant health, including:

Sampling New Zealand native trees from botanic gardens in the UK and Australia carried out during the B3 programme has identified a range of insects and nematodes attacking these plants which could be a risk if they were introduced to this country. Aligned work has looked at a range of possible routes (pathways) these organisms could get into New Zealand to assess the likelihood of their introduction and of establishment if they got here.

Dr Bell says one current example of the way IPSN is working is the threat to NZ plants from myrtle rust (Puccinia psidii s.l.), an invasive plant disease first detected in Australia in 2010.

“We’re on alert for any signs of this disease due to past instances of rusts being blown across the Tasman Sea from Australia,” he says.

“A lot of our iconic native trees belong to the myrtle family and are potentially susceptible to this disease. Scion and Plant and Food Research have been developing links in Australia looking at New Zealand native plants over there and seeing which of them might be susceptible. Auckland Botanic Gardens has established a sentinel project where a subset of Myrtaceous plants grown at the gardens are now mapped and regularly checked for the disease. Meanwhile, Plant and Food Research has also had two summer student projects exploring engagement with Maori over the potential impact of myrtle rust on taonga species.”

Director of the B3, Dr David Teulon, says invasive pests and diseases are a major threat to New Zealand agricultural and horticultural sectors, on which much of our economy is based.

“Having a strong network of surveillance tools in place, such as sentinel plants, decreases the potential for highly damaging biosecurity threats to enter and establish in New Zealand.”

Back in London, the ‘Beyond our Borders’ garden at the Chelsea Flower Show uses British oak trees to epitomise ‘early warning’ sentinels throughout the world. The garden features three different and distinct climatic zones (Australasia, Arid and Tropical) separated by pools of water representing oceans. Each zone contains a single oak tree standing among plants native to each climate. Set within the plants of each zone are coloured springs representing plant pests and diseases. These appear to emerge and disappear and some are stretched to create a wave motion over the top of each ocean. This represents the movement of plant pests and diseases within and between each zone, reflecting the threat to plant health.

The ‘Beyond our Borders’ garden has been awarded a prestigious Gold Medal at Chelsea. A great result for the project, the IPSN global co-ordinator Ellie Barham and the garden designer Sarah Eberle. Photos of the garden at: www.rhs.org.uk/shows-events/rhs-chelsea-flower-show/exhibitors/2015/gardens/beyond-our-borders and a brief overview of the garden at: www.youtube.com/watch?v=Ij8DdEhVhyI.

Better Border Biosecurity (B3) is a cooperative science collaboration that researches ways to reduce the entry and establishment of new plant pests and diseases in New Zealand. B3 integrates investment and expertise from five research organisations – AgResearch, the Bio-Protection Research Centre, Landcare Research, Plant & Food Research and Scion – and three end-user partners – the Ministry for Primary Industries (MPI), the Department of Conservation and the New Zealand Forest Owners Association. 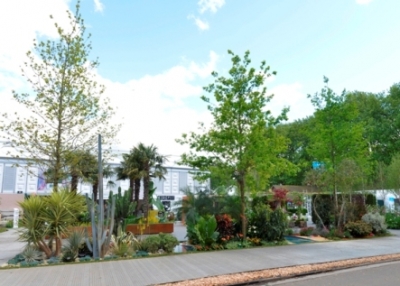