The awards recognise the outstanding contributions from individuals and groups across the system including separate awards for innovation, schools, communities, Māori, industry, local and central government, emerging leaders, sustained individual commitment and science.

B3’s science entry summed up the research collaboration’s more than 15 years of mahi providing science to protect Aotearoa’s plants, but focused on the impact of more than 8 recently-completed major research projects that span risk assessment, managing pathways of biosecurity threat into the country, diagnosis of threats, and the science behind ongoing surveillance and eradication.

B3 Director Dr. David Teulon says through co-innovation, and with industry, iwi, and community interests, B3 has delivered tangible and substantial impacts to New Zealand biosecurity. The entry illustrated B3’s critical role in delivering the world-class scientific knowledge and tools required for New Zealand’s biosecurity system to be resilient and world-leading.

David says the science award win reflects the passion of many scientists, merging their expertise from a range of different disciplines and organisations to tackle the major issue of invasive species in Aotearoa New Zealand.  Many people have contributed to this award he says.  It was especially gratifying to have B3 Chair James Buwalda present at the presentation after his recent illness. James says the award reflected the culmination of many years of hard work by the B3 community.

David says the contributions from other finalists and winners were outstanding and deserve wholehearted recognition, and especially those of the Supreme Award winner – Wilderlab.  B3 is working with Wilderlab, in collaboration with the Biological Heritage National Science Challenge, to apply eDNA surveillance technologies for terrestrial systems.

B3 integrates investment and expertise from Plant & Food Research, AgResearch, Scion, Manaaki Whenua Landcare Research and Lincoln University, as well as end-user organisations such as the Ministry for Primary Industries, Department of Conservation, Environmental Protection Authority, and representatives from the forestry, horticultural, cropping and pastoral industries and Māori/iwi.

More information on the Awards can be found at: Ko Tātou This is Us | NZ Biosecurity Awards – 2022 finalists and winners 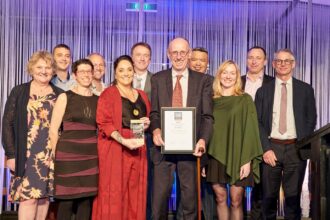