“Has it just arrived or not?” and “Where is it from?” are questions biosecurity officials often ask when an exotic insect invader is discovered in New Zealand. A B3 research project investigating natural abundance stable isotopes and trace elements as geolocality markers is helping the Ministry for Primary Industries (MPI) to deal with this uncertainty for more timely, appropriate and cost-effective biosecurity operational decisions.

A key concern for MPI is to know when a new find of a high risk pest in New Zealand represents a fresh incursion, and therefore requires only a localised response. Alternatively, if it is found the pest already has an established population in New Zealand then a much more extensive response is required. To know which of these situations apply would greatly assist with determining when expensive eradication responses are necessary, and when they might be avoided. A key example was the urgent need for this information during the painted apple moth and fall web worm incursions in Auckland in 2005–2006, situations that encouraged MPI to engage with stable isotope technology even though it was only in a very early stage of development for insect provenancing at that time.

Key to the use of biogeochemicals as provenance markers is the assumption that the stable isotope ratios and trace element concentrations found in an insect reflect a ‘signature’ of the environment where the insect developed. The biogeochemicals are a function of the insect’s food chain, because their plant diet in turn characteristically reflects the chemical environment in which it is grown. However, while scientists have been using these elements to trace geographic origins of various animals since the 1970s, the methods available until now would only allow them to measure the abundant trace elements and isotopes such as hydrogen and carbon.  These elements could roughly indicate latitude, but as an integral part of the insect’s biological system they become very unreliable on their own as provenance markers.

Improvements in mass spectrometry methods and attention to the use of relatively inert tissues such as the wings have made it possible for Dr Peter Holder and Dr Karen Armstrong to study multiple isotopes and trace elements in a single insect. They have recently analysed the heavier, less abundant isotopes, which provide better clues to natal origin since they are unaffected by biological processes. However, these heavy isotopes (such as strontium and lead), which are indicators of the age of the underlying bedrock, are hard to measure. It took Dr Holder a year of laboratory work to develop a mass spectrometry method to measure these isotopes in individual insects, and in a way that enabled the other elements and isotopes to also be read from the same sample.

Holder is continuing to improve his method, but he has already shown that it is much more accurate than any previously developed method. This approach can differentiate between New Zealand and eastern Australian origins with 100% accuracy.  It can also correctly assign an insect back to its place of origin about 75% of the time. With the addition of more locality data plus more sophisticated modelling techniques the method’s accuracy is anticipated to improve. Towards this, future research being developed in consultation with MPI is now investigating different modes of insect feeding and how these might affect isotope and trace element signals of the same locality. The team will also study the influence that seasonal changes, different host plants and anthropogenic activities may have on the integrity of the locality-to-insect signal.

The modifications and significantly more robust data that will be developed through this B3 research will greatly assist with the reliable implementation of this technology in the future, especially with major pest eradication programmes akin to those of painted apple moth and fall webworm and the Asian gypsy moth in Hamilton in 2003. However, the need to know immediate origins of a pest reaches out to other aspects of the biosecurity system and can arise every few weeks. For example, high-impact ant incursions frequently occur around New Zealand. Knowledge of whether they belong to established nests in New Zealand or are individuals associated with, for example, an incoming container could help decide whether and how to direct offshore container inspections and devanning site decontamination. Thus off-shore risk mitigation activity, surveillance and preventative activities can be more effectively targeted.

Similarly, proving that wood boring beetles detected in imported furniture are of overseas origin would support the application of intensive pre-border treatment at the site where they are manufactured. Or conversely, point-of-origin information can reassure trading partners that a pest species intercepted in New Zealand is not established here, thus avoiding costly interruptions to our exports. A major example of this is fruit fly (Tephritidae) which is of significant concern to some of our key trade partners. As such, it is the target of an extensive active surveillance system in New Zealand, which might also be enhanced by linking it to reference data for this technology. 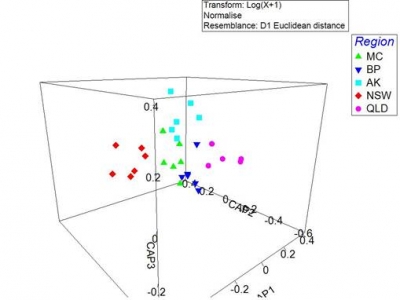 Fig. 2. A 3D graph showing the difference in biogeochemical marker profiles of H. armigera specimens from Australian and New Zealand regions. This shows a multivariate data cloud made up of hydrogen, strontium and lead isotope values, plus trace element concentration data. The clumping of data points from the same region indicates the reliability of identifying the point-of-origin for this species with this method. 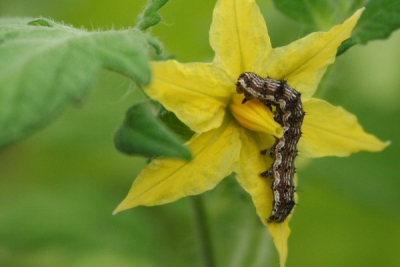