In May 2010, a species of butterfly never before recorded in New Zealand was discovered in a home garden near the Port of Nelson. The arrival of great white butterfly (Pieris brassicae) immediately raised concern because of its potential threat to commercial and home brassica crops, and to forage brassica crops that are used to feed livestock for New Zealand’s dairy and meat industries. In addition, New Zealand has 79 species of native brassicas, many of which are very rare, that are threatened by the arrival of great white butterfly.

Great white butterfly was initially found close to the port, thus it might have arrived on imported shipping containers. It was expected to spread quickly beyond Nelson, both because it has been invasive elsewhere in the world and because a close relative, the cabbage white butterfly, also spread quickly and widely throughout New Zealand when it first arrived.  Great white butterfly is a well-known pest in Asia and Europe, where it is widely distributed, and it has invaded South Africa and Chile.

The Ministry for Primary Industries (MPI) immediately set up a monitoring project to track the butterfly’s spread which continued until 2012 when, surprisingly, the results suggested the butterfly was still confined to Nelson. The Department of Conservation (DOC) began an eradication programme in December 2012 with assistance from MPI, B3 and industry stakeholders such as the Foundation for Arable Research and Vegetables NZ.

DOC developed a two pronged approach – eliminating outliers to limit further spread, while also suppressing the larger population found in residential gardens near the port. They went door-to-door searching for great white butterflies in gardens where host plants were probably growing, and they also worked hard to communicate the issue widely to the Nelson community. As a result, many people reported new discoveries, to which DOC immediately responded by killing all of the great white butterflies present, searching surrounding properties within a 200-metre radius, and managing any additional butterflies and host plants found.

It is currently too soon to tell if the eradication programme will be successful, but there are good indications that it is making progress. The butterfly’s range is now confined to a 6-7 kilometre radius from the port and DOC’s surveillance data suggest the butterflies are becoming less abundant and harder to find. Once the data for this autumn is analysed and compared to last autumn, DOC and B3 scientists hope to have a more complete picture of how effective the eradication programme has been to date.

B3 researchers are supporting the response in several ways.  Craig Phillips and John Kean (both AgResearch) are conducting ongoing work to analyse the detection records to determine how the butterfly’s distribution is changing and to track population trends through time. They are also providing advice to the eradication team about how to prioritise their activities, and they developed a phenology model for great white butterfly to predict its seasonality in Nelson.

Max Suckling (Plant & Food Research) is researching attractants for the butterfly that could lure the insects to traps, which would improve trap efficacy greatly. Ela Sawicka (AgResearch) and Craig Phillips have also been studying the genetic diversity of the Nelson population and comparing that to populations elsewhere in the world to determine the origin of the Nelson butterflies. This will also help scientists recognise if new immigrants arrive, and whether eggs that are located in an area previously searched are new, or if they were missed during previous searches.

These various research projects are being funded from a range of sources including MPI, the Ellet Trust and B3. They are helping to confine and suppress great white butterfly in Nelson, and regardless of whether the species can be eradicated completely in New Zealand, Craig Phillips believes that the effort has proven the value of such collaborative, multi-agency eradication programmes. This is a great example of what B3 is all about says David Teulon, B3 Director – a range of organisations coming together coming together to tackle an important challenge for New Zealand with key research capability from B3 providing underpinning support. 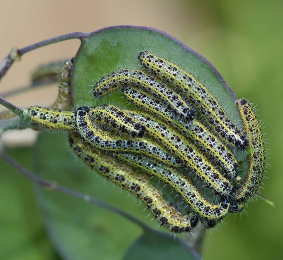