Scientists at Plant & Food Research, B3 (Better Border Biosecurity), Scion and the University of Auckland have been studying the ‘bedroom’ behaviour of the parasitoid wasp Cotesia urabae to better understand the insects’ mating activity and preferences.

Cotesia urabae is a natural enemy of the eucalypt feeding pest Uraba lugens, an Australian moth whose larvae can cause severe damage to a range of Eucalyptus tree species.

Severe outbreaks of U. lugens have been reported in Western Australia, where more than 250,000 hectares have been affected. A similar outbreak in New Zealand could potentially devastate commercial plantations of Eucalyptus and cost the industry many millions of dollars.

Using a special Y-shaped olfactory tube, the scientists investigated how odours emitted by both male and female wasps influenced attraction. The tube presents the target wasp with a choice of odours emitted down the arms of the tube.

The researchers found that male wasps were overwhelmingly attracted to the odour of virgin females and not previously mated ones.

“We discovered that mating success was more likely and the time taken for mating to commence was lower when two males were competing, as opposed to scenarios involving solitary or non-competing males,” says Plant & Food Research entomologist Dr Gonzalo Avila.

“We also found that the actual duration of mating was longer when two males had been competing for a female.

“This may be guarding behaviour where the successful male stays in position until the female becomes unresponsive so as to reduce the opportunity for a competitor to mate.

The results revealed that larger males had more success with mating, although it is not clear whether this is due to female preference or larger males winning in competitive behaviour.

By understanding the conditions leading to successful reproduction of C. urabae, scientists hope to advance the capability of rearing the wasp in captivity for use as a biocontrol agent against U. lugens.

According to Dr Avila, while the study was time and labour intensive, the results have now established a knowledge base and more specific laboratory conditions can be established to further explore how to best rear C. urabae.

“We can now modify the laboratory conditions to pair two males with a single virgin female and prioritise larger males. A key goal of the overall research is to create conditions conducive to mating success and increasing the percentage of female offspring of this parasitoid species,” says Dr Avila.

The research has been published in the Bulletin of Entomological Research. 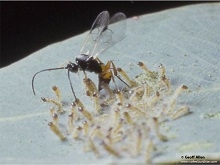