In March, Dr Richard Baker, the coordinator and science leader for a leading European biosecurity research programme known as PRATIQUE (Pest Risk Assessment Techniques), visited New Zealand to discuss the initiative he has been leading and lessons from this work that are applicable to this country.

Dr Baker led two days of workshops, sponsored by AGMARDT, which provided an opportunity for New Zealand researchers and industry stakeholders to share information regarding updated techniques for risk assessment, access to databases and the establishment of user-friendly decision support systems. While in New Zealand, Dr Baker also visited AgResearch, the Ministry of Agriculture and Forestry (MAF) and Lincoln University to further discussions from the workshops.

PRATIQUE was established in response to the growing threat to Europe of alien invasive species due to increasing globalisation. Its purpose was to develop more efficient risk analytical techniques for pests and pathogens of significant phytosanitary concern. The now completed project involved scientists from 15 partner institutions, 11 countries in the European Union, along with other scientists from China, Russia, the U.S., Canada, Australia and New Zealand.

The knowledge and experience gained from this programme will inform similar attempts to improve risk analysis in this country, namely the Better Border Biosecurity (B3) research programme (http://b3nz.org/). B3’s objectives are similar to those of PRATIQUE, and thus Dr Baker’s visit was a unique opportunity to capitalise on the European data, methodology and findings in order to avoid duplication of effort and move the New Zealand research ahead as quickly as possible.

The workshops covered an overview of the PRATIQUE experience, issues with data requirements for a risk analysis, systems approaches to phytosanitary policy and commodity risk assessment/management, amongst other topics.

Dr Baker says, “There were lots of very challenging questions. People are trying to pick out particular lessons from our work that they might be able to take further in the New Zealand context. But for me it was as much about learning as teaching. I have enjoyed the dialogue about what New Zealand is doing to protect its borders.” He also noted that New Zealand is much more focused on risks posed by pathways than Europe, which tends to focus on risk species.

Although New Zealand tends to have the perception that European borders are wide open to invading species compared to our borders, Dr Baker said that this is not necessarily always the case. PRATIQUE has made large strides in protecting European biodiversity by keeping non-native organisms out. A discussion that Dr Baker found particularly intriguing was around those New Zealand species that have invaded Europe, as well as the reverse.

Dr Stephen Goldson, Executive Director of B3, says, “Dr Baker’s visit was exceptionally useful to both the scientists and operational people in the B3 collaboration, and the lessons learned will help B3 to continue to develop research that is at the forefront of protecting New Zealand productive and natural ecosystems from invasive species.” 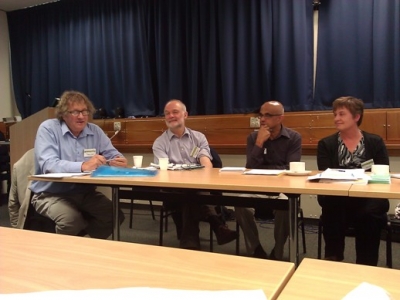