In the last week of July 2016 the Hon. Nathan Guy launched the strategic document ‘Biosecurity 2025’ for public consultation. The Minister is adamant in emphasising that biosecurity is his top priority and, likewise, industry has consistently placed the maintenance of our world-leading biosecurity system as their number one issue (KPMG Agribusiness Agenda, 2011-2016). Biosecurity also figures prominently in New Zealand’s recently developed Biological Heritage National Science Challenge. Thus, overall, there is overwhelming consensus that biosecurity is a critical issue for New Zealand.

‘Biosecurity 2025’ re-emphasises our incontrovertible need to reduce the cumulative impact of invasive alien species on New Zealand’s valued productive sector and natural ecosystems. Such a necessity is an unavoidable imperative that all New Zealanders must rise to. This country’s relative isolation has provided us with a natural advantage in our fight to avoid the ravages of many pests and diseases of our important plant and animal species. Thus we are able to grow crops and trees, farm animals and forage without many of the chemical interventions required in other countries. This plays a very large part in us being able to market premium quality products to the rest of the world.

Notably, though, biosecurity is not just about keeping our plant and animal systems healthy. It is also about ensuring access to international markets for our agricultural, horticultural and forestry products, as well as providing the confidence needed for future investment in innovative plant and animal systems. Nor is it just about trade. Amongst other things an outbreak of foot and mouth disease would have a colossal impact on tourism. Finally, and not least, our unique indigenous ecosystems and species (taonga) have immeasurable scientific, ecological, recreational and cultural significance to Māori and non-Māori people alike. Biosecurity is also about protecting human health, e.g. keeping vectors of human disease such as particular mosquito species.

Despite the reasonable claim that New Zealand has one of the best biosecurity systems in the world, it cannot create perfect biosecurity, so there is an ongoing need to do better. The biosecurity challenges we face are intensifying with increasing and changing trade and tourism, as well as climate change. Even if we were to stop all trade and tourism (and return overseas trips by Kiwis), we would still be hit by a number of wind-borne pests and diseases from Australia. Localised ‘sleeper’ pests may also become more problematic as they increase their abundance and distribution. In short, the biosecurity threat is changing almost daily and we need to respond accordingly. ‘Biosecurity 2025’ will help in fulfilling this by providing the strategic platform for us all to move forward over the next 10 years – and science must play a key role.

‘Biosecurity 2025’ has proposed five strategic priorities, which impinge on the New Zealand cross-sectoral, multi-partner research collaboration called ‘Better Border Biosecurity’ or ‘B3’ (www.B3nz.org). B3 is a cooperative science collaboration that researches ways to reduce the entry and establishment of new plant pests, diseases and weeds in New Zealand. B3 integrates investment and expertise from five research organisations (AgResearch, the Bio-Protection Research Centre, Landcare Research, Plant & Food Research and Scion) and three end-user partners (the Ministry for Primary Industries, the Department of Conservation and the New Zealand Forest Owners Association). Other sector interests are currently represented on an observer basis. B3 is aligned to New Zealand’s Biological Heritage National Science Challenge.

From this perspective the authors are able to make the following high-level comments on ‘Biosecurity 2025’s strategic priorities:

1. A biosecurity team comprising all New Zealanders. It is clear from the magnitude, complexity and sheer importance of the biosecurity challenges we face that everyone in New Zealand needs to be active in dealing with them. Whether this is filling out the biosecurity arrival forms accurately, or responding positively when a biosecurity officer asks to strip backyard fruit trees during a fruit fly incursion, these things are all vitally important. There has recently been clear evidence of effective public participation in our biosecurity system, with local residents providing a valuable role in searching for great white butterflies during the recent Nelson city eradication programme. Similarly, the public is now participating in the lookout for the brown marmorated stink bug and calling the Ministry for Primary Industries’ 0800 number (0800 80 99 66) when they find something dubious. This is currently helping to reassure all parties that the bug is not established in New Zealand.

Having a well-informed public involved in this way in biosecurity surveillance and response is most worthwhile and new initiatives to engage them further can only be valuable. In exactly the same way, growers and pastoral farmers are increasingly more vigilant in looking out for specific threats to their sector. To this end a quiet revolution is occurring in the area of biosecurity readiness and response, with the Crown and several primary production sectors recently signing (separately) the GIA or Government Industry Agreement. The GIA provides a means for sharing decision-making and costs in the event of an incursion.

The National Biosecurity Capability Network is another great example of New Zealanders working together. This volunteer army, coordinated by the Ministry for Primary Industries and AsureQuality, is brought together during a biosecurity outbreak. It numbers over 60,000 people from 144 organisations and they come from all works of life such as central and local government, industry and iwi. The expertise from these different sources provides a potent pool of talent that can make all the difference during a biosecurity response.

2. A toolbox for tomorrow. New Zealand’s biosecurity system is multi-layered, reflecting the complex and evolving challenge at hand. Based on multi-national and bi-lateral agreements it includes: (i) assessment of the pests and diseases of risk to this country; (ii) an analysis of the pathways these organisms might use to get to New Zealand and how to close or manage these pathways; (iii) the development and use of diagnostic systems and methods to categorise or identify these species; (iv) surveillance to detect and intercept any incursions as early as possible; and (v) tools to eradicate and manage them, should they establish.

Also research and development advances are now being underpinned by the very rapid advances in computational analysis, molecular biology, remote sensing, chemical ecology, application technologies and social science, to name a few. It is these sorts of disciplines that will ensure that New Zealand’s biosecurity is up to the mark. The ongoing challenge for all in the biosecurity community is to support fit-for-purpose research that informs and adds to the effectiveness of biosecurity at the border. New initiatives in ‘Adoption and Practice Change’ and ‘Research, Technology & Innovation Practice’ within the science community and the Ministry for Primary Industries reflect such a requirement.

3. Free-flowing information highways. Biosecurity is a numbers game. There are tens of thousands of potential risk organisms throughout the world that threaten New Zealand’s ecosystems (and public health). A certain number of these risk organisms reach our border where many are intercepted and destroyed. Indeed, some may breach the border and some are then eradicated. Of those that do manage to establish within New Zealand, some may be of insignificant impact and yet others may turn out to be serious pests. While some of these pests may indeed be able to be brought under control, doing so may well disrupt existing biologically-based pest management systems and will result in intensified pesticide use. Further, while some newly-established species may cause little damage to New Zealand systems, their mere presence can inhibit access to sensitive international markets for our products.

Such biosecurity complexity occurs within the context of the numerous different modes of entry for pest organisms, compounded by New Zealand’s different climates and the variety and value of the different plant and animal systems. Thus the numerical complexities and biosecurity challenges are very apparent. Nevertheless there is a real opportunity to better understand the functioning of our border by the better collection, synthesis and analysis of the component parts of the biosecurity system. In essence, this is the basis of an ‘information highway’ that will benefit hugely from new and sophisticated data management and computational systems to respond better to prevailing and emergent threats.

4. Effective leadership and governance. The Ministry for Primary Industries provides overall leadership for this country’s biosecurity system. Given the simple structure of New Zealand’s governmental structures compared to other countries where federal systems often operate, there is real opportunity for getting things right. These features include focus, integration and agreement across the government, industry, public and science communities. There is the potential for timely implementation of measures, including initiatives such as the GIA and the recently-created National Science Challenges.

5. Tomorrow’s skills and assets. It is clear that the biosecurity challenge is only going to increase and that we will need to rely more and more on the skills of well-trained biosecurity professionals. We will also need to continue to develop a biosecurity ethos across the whole of New Zealand society. There are steps currently underway to include biosecurity topics within the school curricula and there is an ongoing pressure to encourage this further. The Bio-Protection Research Centre at Lincoln University is working closely with B3 and the Biological Heritage National Science Challenge, and these organisations have been and are working at the forefront of training biosecurity graduates. It is encouraging to note that such developments are in the context of several other initiatives created by other New Zealand universities to increase their focus in this area. However such ongoing momentum requires consistent and predictable government and industry commitment to offer meaningful careers in the area of border biosecurity.

‘Biosecurity 2025’ has ambitious objectives which rightly reflect the challenges New Zealand faces to protect valued productive sectors and natural ecosystems from invasive pest species. As well as extensive public involvement, New Zealand needs to be alert to the need for research and innovation combined with excellent leadership and effective organisational structures for border biosecurity operations.

David Teulon is the current B3 Director. Email: david.teulon@plantandfood.co.nz

Stephen Goldson a past B3 Director. Email: stephen.goldson@agresearch.co.nz 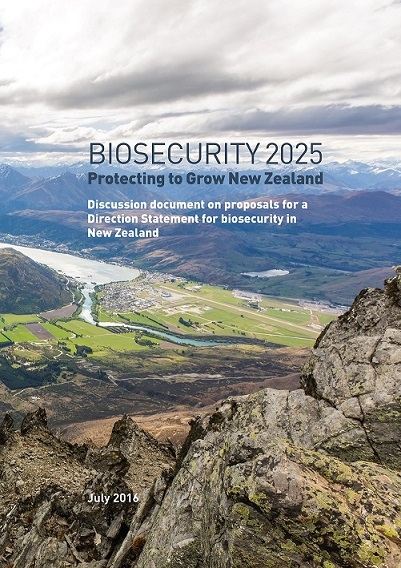