Five new projects will be fully funded and one partially by B3 following a competitive process that involved identifying key gaps in its research agenda.

The robust process to identify projects began in October 2019 at which time B3 science partners submitted their ideas. Reviews by the B3 Science Advisory Group (SAG) followed with final approval given by the B3 Collaboration Council.

B3 Director Dr David Teulon says co-innovation has been critical to the development of these new projects. This has meant working closely with key stakeholders so that the research targets high priority biosecurity needs for New Zealand and outcomes are implemented by government and industry.

The six new projects are:
• Xylella fastidiosa and its vectors in the native estate. Xylella is a serious invasive pathogen currently spreading through the world and of serious concern for many NZ sectors including the natural estate. The potential for NZ native insects to transmit Xylella needs to be understood. This project will work closely with the Xylella Action Group and is exploring connections with Euphresco.
Project Lead (PL): Jessica Dohmen-Vereijssen. Crown Research Institutes (CRIs): Plant & Food Research (PFR), Manaaki Whenua Landcare Research (MWLR). Term: 5 years

• Global change and NZ biosecurity: risks and economics of future climates and trade patterns. The short, medium and long term impacts of climate change on plant border biosecurity are not well understood. This project will bring together all interested parties (science, government, industry) in the first year to develop a programme of research targeting the main issues. The project is strongly linked to Australia’s Centre of Excellence for Biosecurity Risk Analysis (CEBRA).
PL: Nicolas Meurisse. CRIs: Scion, AGR, PFR. Term: 5 years

• Prospects for the future of the fumigation research: comparative review. Treatments within the trade pathway are a major part of the biosecurity tool-kit and are severely impacted with the imminent loss of methyl bromide. This short project, which will include literature and a stakeholder workshop, aims to set the scene for a larger and more experimental project to be submitted at a later date. It is strongly aligned with a recently MPI funded project.
PL: Kambiz Esfandi. CRIs: PFR. Term: 1 year

• Remote sensing for biosecurity threats in nurseries. Early detection of asymptomatic pathogens within plant nurseries can make the difference between eradication and establishment. This project will investigate the relatively novel use of hyperspectral imaging for surveillance of invasive pathogens in nurseries initially targeting the destructive plant pathogen Phytophthora. It is exploring links to Euphresco.
PL: Rebecca MacDougal. CRIs: Scion. Term: 3 years

• Aerodynamic design principles for effective insect traps. Early detection and delimitation of invasive species is essential for successful biosecurity outcomes. This project will investigate some of the fundamental principles needed to develop more effective insect traps for BMSB, a key biosecurity risk threat for which there are limited trapping options. This project will working closely with the BMSB Council.
PL: Rachael Horner. CRIs: PFR, Scion. Term: 3 years

• Effectiveness of UAVs for spot spraying large urban trees during incursion responses. The use of pesticides is likely to continue in the near future as a key tactic for eradication of invasive species, but under the strictest of conditions to minimise environmental and social impacts. This project will investigate the use UAVs to provide much more precise application opportunities than current alternatives and in difficult to access places such as urban trees.
PL: Justin Nairn. CRIs: Scion. Term: 1 year

“It is also great to see three new project leaders join the programme,” he added.

Better Border Biosecurity (B3) is a multi-partner, science collaboration that researches ways to reduce the entry and establishment of new plant pests, and pathogens and weeds in New Zealand. B3 is aligned to New Zealand’s Biological Heritage National Science Challenge.

Read about other B3 projects currently underway here. 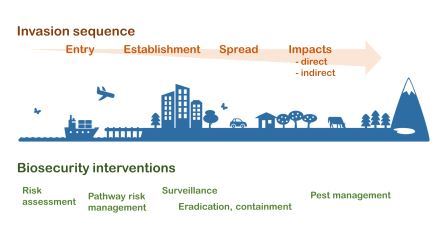