Improving a smart trap to automatically detect fruit flies and gypsy moths, and investigating the potential impact of Fall Army Worm on plants of value to Māori are two of the projects undertaken by this year’s B3 summer students.

Every year B3 welcomes students from a range of universities to take part in the B3 research programme over the summer.

B3 Director David Teulon says summer students provide a valuable contribution to the research programme while giving students valuable experience working with senior scientists and the ability to enhance their biosecurity career prospects.

University of Auckland postgraduate biosecurity and conservation student Taylah Dalton will be based in Kerikeri and studying the potential impact of the Fall Army Worm on plants of value to Māori in the Te Tai Tokerau rohe. She is being supervised by David Teulon, Alby Marsh and Teresa Waiariki as part of the PFR Te Rito programme.

University of Canterbury student Connor Kwon will assist with production of a final smart-trap prototype that will catch and identify through machine learning the classification of trapped insect species. Connor will also be involved in field and wind tunnels trials of the trap, aimed at catching fruit flies and gypsy moths. He is being supervised by Flore Mas (PFR).

University of Canterbury data science student Shraddha Holay will be working on a project to use remote sensing technology (hyperspectral imaging data) to identify biosecurity threats in a range of plant systems. The ultimate focus of the wider project Shraddha is involved with is the early detection of pests or invasive species.  Her supervisor is Federico Tomasetto (AGR).

University of Canterbury student Rey Dela Cruz is being supervised by Munir Shah (AGR) as part of a project to visually identify contaminants on shipping containers. Rey will create a large-scale dataset for the AI system to detect contaminants on container outer surfaces under complex weather and lighting conditions. He will also develop machine-learning algorithms to detect container numbers and other details, and types of contaminants.

University of Otago student Hadley Muller is undertaking a studying titled ‘Fried Weevils – REIMS fingerprinting of weevils to determine age, sex and other biosecurity relevant attributes’ for his summer studentship project. REIMS  – or Rapid Evaporative Ionisation Mass Spectrometry  – is an emerging technique that allows rapid characterization of biological tissues or differentiation of species. He is being supervised by Alastair Ross (AGR) who is exploring the potential of mass spectral imaging for solving tricky biosecurity issues. 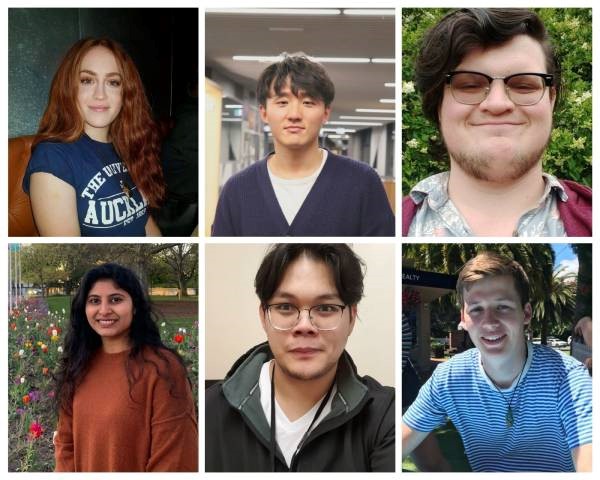