You might assume that the biggest problem border officials face is identifying foreign organisms in order to determine whether they pose a biosecurity risk. However, there is also a more fundamental dilemma, which is to determine whether invading organisms, often present as eggs or larvae, are dead or alive. This might seem an obvious and straightforward problem to solve, but until recently it remained a serious difficulty for agencies such as Ministry of Agriculture and Fisheries (MAF).

To address this concern, a team of AgResearch scientists including Dr Craig Phillips, Dr Ilia Iline, Max Novoselov, Nicky Richards and Mark McNeill began developing a viability test for MAF in 2004 with support from Better Border Biosecurity (B3). They initially used an electrophoresis technique to determine if enzymes in the tested organism had begun degrading or not, since dead organisms no longer produce enzymes.

This technique allowed researchers to determine with high accuracy whether an organism in any developmental form from egg to adult was alive. However, it was complicated and time-consuming to create and run the electrophoresis process, and thus it was not a technique that could be practically adopted by end users such as MAF for day-to-day use.

The team’s next goal was therefore to find a way to skip the electrophoresis process and create the enzyme staining in a test tube. They were able to develop such a process, but unlike in electrophoresis, the tube method did not indicate whether the enzymes that were still present were degrading or not. This is an important distinction to make because some enzymes can remain active, even when partly degraded, for weeks or even months after an organism dies, and thus their presence alone does not necessarily indicate whether the organism is alive.

The team therefore began looking for other compounds that might break down more quickly than enzymes, and they settled on a molecule known as adenosine-5′-triphosphate (ATP). ATP is a coenzyme that is present in all living things and transports chemical energy within cells for metabolism. It degrades quickly once an organism dies, so the scientists were able to develop a very simple and practical test that could be conducted even on a miniscule amount of biological material.

AgResearch now provides various agencies including MAF, Scion and Plant and Food Research with kits that they can use to carry out the viability testing. A patent for the test has been submitted to the authorities in both Australia and New Zealand, and the research is currently under review for publication, which should help encourage other biosecurity agencies worldwide to adopt the technology.

The development of the viability test has also had other unexpected outcomes, Phillips says, because “we also realised that we could develop tests for all kinds of things, not just viability.” For example, the team has developed a test to determine whether parasitic wasps that are used for biocontrol have fed on nectar, which is beneficial to the wasps in providing energy and therefore allowing them to lay more eggs. The new test tube analysis can be done in a fraction of the time and for a fraction of the cost of the previously used test, which was very complex and expensive.

A second test that the researchers have invented can be used to determine if food substances such as meat are cooked. Cooking can destroy harmful microorganisms, but it can be hard to visually determine whether food has been cooked for long enough or at high enough temperatures to destroy any pathogens that may be present. This new test looks at residual enzyme activity to give a quick and definitive answer to this question.

The test for whether a substance is cooked has been useful in areas that the team never expected. For example, it has enabled food manufacturers to look at organisms found as contaminants in food products and determine if they have undergone the high temperatures present in the production line. This in turn indicates whether the organism contaminated the food during or after production and therefore whether contamination in the production line needs to be investigated.

Apart from the practical outcomes these tests have provided end-users such as MAF, Phillips says there have also been other huge lessons in the test development process.

“This project required that we engaged with MAF to understand their requirements as an end user and also that MAF understood our capabilities as researchers.” This process necessitated excellent communication between the partners so that MAF could help ensure that the specifications for the test were appropriate for implementing the tests in the real world, which is so much more complicated than a laboratory setting.

“This process is illustrative,” Phillips says, “of the challenges in trying to produce new biosecurity tools. We had proof of concept early on, but actually that was only about 10% of the work. Getting this through into a real world setting has been a huge challenge.”

Details of the viability test can be found at www.agresearch.co.nz/bvt. 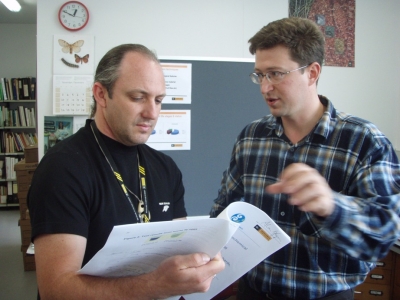