Scientists from Plant & Food Research are working to protect New Zealand borders from future incursions of the Queensland fruit fly (Qfly) and support control of populations in areas of eastern Australia where it is a major pest of horticultural crops.

Plant & Food Research has initiated several collaborative projects, aligned to the Better Border Biosecurity (B3) collaboration, including the identification of new chemical attractants, based on sex pheromones and other odours, that could be used in the development of improved detection and control techniques; and the development of new protocols for detecting and managing potential new Qfly incursions.

“Qfly infests more than 100 species of fruit and vegetable crops, including commercial crops such as avocado, citrus, feijoa, grape, peppers, persimmon, pipfruit and stonefruit,” says Plant & Food Research Science Group Leader Biosecurity and B3 Theme Leader Dr Max Suckling. “The loss of organophosphate insecticides due to their regulatory withdrawal in Australia has resulted in outbreaks of the pest in Australia, and climate change and the insect’s adaptation are thought to have conspired to enable it to extend its range into cooler areas of south-eastern Australia. New Zealand is now at an increased threat level, as demonstrated by the recent eradication programme in Auckland.”

As part of the new research programme, Plant & Food Research will be importing sterile Qfly from Australia, under approval from the Ministry for Primary Industries and the Environmental Protection Authority.

“Holding a population of Qfly in containment will allow us to determine more about the biology of the insect and develop new trapping and control methods to support New Zealand’s surveillance and defence efforts,” says Dr Suckling.

Plant & Food Research is also a member of SITplus, a A$22 million consortium aimed at developing new technologies to control Qfly. The collaboration of research, regulatory and funding agencies have joined forces to develop the use of Sterile Insect Technique (SIT) for the management of Qfly.

Plant & Food Research also has a long-term research collaboration on Qfly with New Calendonian researchers at the Institut Agronomique Neo-Caledonien (IAC), and is offering graduate research opportunities in collaboration with Macquarie University, also a partner in the SITplus consortium, as part of the new Australian Industry Transformation Training Centre.

“Qfly is a potential problem for other countries that produce horticultural crops,” says Dr Suckling. “Being able to collaborate with leading research teams in the area allows us exchange ideas and technical knowledge, creating an environment where questions can be answered faster and more efficiently. Having diverse field sites in different countries also offers us the opportunity to answer a variety of questions while sharing our knowledge.” 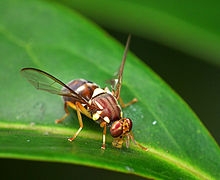