The PBRI Plant Biosecurity Research Symposium was held at the Queensland State Library in Brisbane on the 15 and 16 August. The purpose of the symposium was to share plant biosecurity RD&E across plant industries in Australia and New Zealand, with an aim to avoid duplication of research on common biosecurity themes. This ‘sold-out’ event was the first time biosecurity research, supported by seven plant RDCs and Better Border Biosecurity (B3) New Zealand, had been discussed in one forum.

A Welcome to Country and performance of ‘Kingfisher’ by Gawurra from North Arnhem land provided a memorable start to the PBRI’s first symposium.

The program included two keynote presentations. Firstly Doug Phillips, a grower and a leader in the banana industry, described the Panama disease incursion experience for growers. Doug spoke about the impact of the disease on growers’ businesses, such as their loss of trade and income and the social isolation of having an infected property in a regional community. This was a sobering reminder of the importance of plant biosecurity research and the value of industry, government and research partnerships.

Dr Baldissera Giovani was an invited overseas guest speaker: he is the coordinator of EUPHRESCO, a European initiative which brings together funds to support plant health R&D. EUPHRESCO has 70 organisations from over 50 countries, including Australia, with membership via subscription. EUPHRESCO has supported over 100 projects to date, and has important synergies with PBRI and B3.

The symposium program included session topics linked to the PBRI six Key Focus Areas plus a trans-Tasman session with speakers nominated by B3. Speakers were nominated by PBRI members to provide a brief overview of their work as it related to the Key Focus Area. There were many positive comments about the length of the presentations, which enabled a good range of research content and the use of polling for questions, fielded by Chairs and Dr Steve Dibley (PHA), contributed to the running of the sessions.

Shane Templeton from Templeton Ginger
For many delegates, a highlight was the presentation by growers. Shane Templeton from Templeton Ginger, described his experience with pythium rot, the strict on-farm biosecurity measures he implemented and the effect the disease had on his business. Andrew Weidemann, a grain grower from the Wimmera region in Victoria and Chair of the Southern Region of Grain Producers Australia, spoke about his on-farm biosecurity practices implemented to protect his farm. Islay Robertson from HQ plantations, spoke about the giant pine scale response and the importance of working closely with government to ensure systems and processes are in place before an emergency response.

In the Capability Building session, three Year 10 students (Ebony King, Tate Doneathy and Connor Ferguson) from Glasshouse Christian College spoke about their award winning projects on plant biosecurity. The Queensland Department of Agriculture and Fisheries’ Hermitage Research Facility held an annual Plant Science Competition for students across Australia. This year’s ‘Pest Invaders’ competition engaged over 3,600 students from 145 schools in experimental investigations and research into invasive pests and how they impact on our native environment and agricultural production.

One of the major prizes in the competition was the ‘Conference Award’ which allows 2-3 students the opportunity to attend a national conference, relevant to the topic of study. This gives them a chance to discover the various careers in agriculture and science, gain skills and confidence in presenting and communicating, and expand their knowledge of how science and agriculture is applied in sustainable food and fibre production in Australia and throughout the world.

The 2019 Conference Award winners were interviewed by Dr Harjeet Khanna (SRA) to discover their learning from studying invasive pests this year and to hear about their career aspirations. This session gave a fresh perspective to the program and the students and teacher enjoyed their participation.

The winner was Tim Lester (CRRDC) and runners up were Alison Roach (DA) and Bronwyn Walsh (WA Citrus).

The highlights of the symposium from the audience perspective were polled and a word cloud was created. 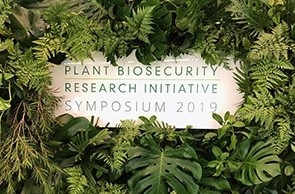