The detection of fruit flies in the Auckland region might lead people to wonder if our biosecurity system is failing. But, with ever increasing travel and trade as an incessant source for these pests and as a constant pressure on the border, what they should be wondering is “how is it that more flies are not found?”

Fruit flies, in particular the Queensland fruit fly (QFF), are one of the biggest risks for New Zealand horticulture. Fruit flies are the primary reason travellers have to dispose of fruit, vegetables and other plant materials at the airport or as they exit cruise ships. Fines at the border for non-disposal are a deterrent and reminder to visitors of the severe consequences to New Zealand should they establish here. Essentially we’d have a vastly changed and constrained horticultural sector, a sector that currently earns us more than $5 billion in exports each year – only slightly less than meat exports and about a third of that of the dairy industry – and employs more than 60,000 people.

New Zealand has one of the best science-based biosecurity systems in the world, based on years of experience and some sound research. The introduction of these flies to New Zealand is now well managed in commercial fruit imports, but fruit with travellers is much harder to regulate. Smarter solutions to manage this risk, and deal with such pests when they arrive, is the focus of research through a variety of multiagency programmes – the Better Border Biosecurity (B3) research collaboration, the Biological Heritage National Science Challenge,  the Bio-Protection Research Centre and others.

B3 provides a hub of biosecurity research activity, including more than 10 projects relevant to fruit fly border protection. The B3 research programme is centred around five themes – assessment of risk, managing entry pathways, diagnostics, surveillance and eradication. If we excel at the first four, then the fifth – the most costly and final option to protect the horticultural industry – is less likely to be required. Once a pest enters New Zealand, there is a limited time to eradicate it before it becomes a huge cost we have to learn to live with.

The first step is to assess what insect pests are a risk to New Zealand and how they might enter the country. B3 is developing new risk models that allow MPI to identify where and how pests, including fruit flies, are most likely to arrive in New Zealand, and how climate might influence which regions of New Zealand could support their establishment.

By working with organisations overseas, B3 is undertaking research to limit the potential for pests to leave their “home” country in shipments to New Zealand. Our science teams are developing pre-border treatments in countries that have been recognised as high risk to reduce the likelihood of live insects reaching our borders. New detection methods that can be used to check containers of produce for the presence of insects are also a priority for key pests like QFF. If fruit fly maggots are found in fruit shipments entering New Zealand, new technologies being developed by B3 will confirm whether the appropriate treatments of these shipments have occurred overseas and provide MPI with evidence to reject those that don’t comply with regulations.

Major centres, ports and other high risk areas are under constant surveillance to ensure no insect pests sneak in undetected. The fruit flies found in the last few weeks were all captured in MPI’s network of traps that span the country. These traps currently only attract male flies, but new research is looking at ways to trap females as well – of higher concern as a pregnant female will have more impact on our industries than a single male with no mate. B3 is also developing biochemical methods to determine whether trapped flies are new arrivals or have been breeding here undetected for a while.

We’re preparing for the day that QFF or other insect pests breach our borders by developing methods of eradication that will hopefully never be required. The reality is that detection of a few lone fruit flies is not altogether bad – it means our surveillance systems are working and that these eradication programmes are not yet needed. The public doesn’t hear about the pests that get stopped on the way to New Zealand, or at the border itself – of more concern would be no insects being found at each of these steps, as it could mean that we’re not looking in the right places for pests that could devastate our way of life. 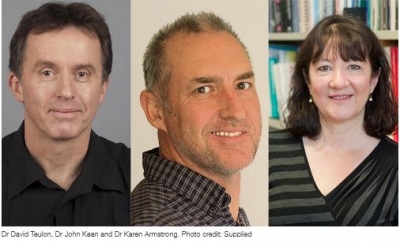