Forest insects that travel the world via global trade can easily become serious pests outside their native home. To address this issue, the National Center for Ecological Analysis and Synthesis (NCEAS) at the University of California, Santa Barbara assembled a group of scientists, economists and policy analysts. Their aim was to assess the costs and benefits of reducing movements of forest insect pests and pathogens by implementing phytosanitary (biosecurity) measures that apply to internationally traded goods.

Dr Eckehard Brockerhoff, principal scientist at Scion (New Zealand Forest Research Institute) and Theme Leader of the Better Border Biosecurity (B3) Pathway Risk Management Theme, contributed to the group through his knowledge of the relationship between pest arrival rates and establishment rates.

The NCEAS project team estimated the ecological and economic impacts of invasive insect pests and diseases, as well as quantifying the costs and benefits of phytosanitary policy that would reduce the biosecurity risks associated with trade. Brockerhoff says the team aimed to determine whether phytosanitary policies would provide a net benefit in monetary terms.

“We know there are environmental costs of unregulated trade, but we wanted to quantify these and weigh them against the economic costs of biosecurity regulation,” he explains.

The group focused on wood packaging as one of its case studies, because this is known to be a major pathway for the introduction of wood borers and bark beetles. In response to this threat, the International Plant Protection Convention developed a policy called ISPM (International Standards for Phytosanitary Measures) No. 15, in 2002. The policy specifies that wood packaging has to be heat treated or fumigated with methyl bromide, both of which are highly effective in killing wood pests in wood packaging materials.

New Zealand was the first country in the world to adopt ISPM 15 in 2004, and the measure has since been ratified by 95% of countries worldwide. This situation therefore presented an ideal case study to examine how ISPM 15 policy has impacted trade and pest infestation rates, and to quantify the costs and benefits of the policy.

Brockerhoff’s role in the NCEAS project was to determine the effect of the ISPM 15 policy on pest infestation rates. His previous work had looked at the relationship between arrival rates and establishment of pests using U.S. and New Zealand data from as far back as 1950. He was then able to determine how much impact a decrease in pest arrival rates (for example, by introducing phytosanitary policy) would have on pest establishment.

Brockerhoff and Mark Kimberley, a modeller at Scion, developed a model that captured the complexity of the relationship between arrival rates and establishment. This model showed that lots of pest species arrive rarely, and a few species arrive very frequently. For the pest species that arrive very frequently at the border, the model showed that their arrival rates would have to be reduced very substantially to affect the species’ likelihood of becoming established. Therefore, measures such as ISPM15 need to be highly effective and depend on high levels of compliance.

While previous studies had examined the relationship between arrival and establishment rates for individual species, this was the first study to examine arrival versus establishment for an entire group (or pool) of thousands of species.

Brockerhoff says the work is now finding its way into policy, recognising that wood packaging needs more attention to improve its effectiveness further.

“Although the economists have not yet finalised the cost-benefit analysis, early results indicate that measures such as ISPM15 are highly cost-effective. We trust that the work will demonstrate that the costs of phytosanitary measures are worthwhile and that it would make sense to develop such policies for other pathways that facilitate pest invasions.” 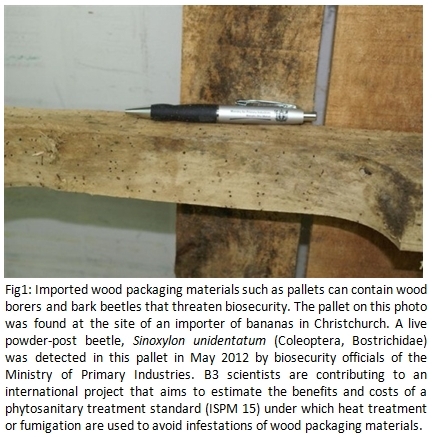