PROTECTION FROM A STINKY PROBLEM

Scientists are working together with the Ministry for Primary Industries (MPI) and industry to limit the potential for a new pest to establish in New Zealand – the brown marmorated stink bug (BMSB).

An Asian native, the stink bug – so called due to the unpleasant odour emitted when disturbed or crushed – has caused wide-spread issues in the US since it was first detected in 1998. New Zealand researchers, as part of the Better Border Biosecurity (B3) collaboration, are investigating the potential for the pest to establish in New Zealand and to assist with developing tools to protect our horticultural and cropping sectors from the risk.

BMSB attacks a broad range of plants, including fruit trees, ornamentals and field crops, damaging both plants and fruit. Potential impacts on our unique natural systems are unknown. In the US, numerous fruit growers have reported loss of more than 50% of their crops. In addition, the BMSB invades homes during the cooler months, with some people finding more than 12,000 BMSB in their houses over the winter.

Dr Barney Stephensen, Principal Adviser, Surveillance and Incursion Investigation at MPI, says, “The brown marmorated stink bug is MPI’s highest priority plant pest and we have invested significant resources into understanding this threat and ensuring that we are doing as much as we can to prevent an incursion. However, given the hitchhiking nature of this pest we are also working with industry and other government agencies to minimise the impacts should it establish.”

MPI, the Department of Conservation (DoC), industry and B3 research representatives have been discussing research priorities through a BMSB Working Group. New Zealand researchers are currently contributing to investigations on potential geographic distribution within New Zealand, improved surveillance and eradication technologies, potential biological control agents, and techniques for assessing whether an incursion is new or not. MPI has already put new regulations in place to limit the chances of BMSB entering New Zealand on goods – such as vehicles, car parts and toys – imported from the US where bug numbers are high.

New Zealand researchers are also actively interacting with US researchers from the US Department of Agriculture (USDA) and various universities with support from the Ministry of Business, Innovation & Employment’s International Mobility Fund. “We’re also looking to join forces with Australia through the Plant Biosecurity CRC [Cooperative Research Centre] as they have the same concerns as New Zealand,” says B3 Director Dr David Teulon.

“The stink bug presents a very real risk to our horticultural and cropping industry, as well as a major nuisance for home owners, and ensuring we do everything to stop a potential incursion is imperative,” says Dr Teulon. “By working with MPI and industry, we can develop barriers to limit the potential for the pest to enter New Zealand, such as new surveillance and detection techniques, as well as prepare as best we can in case these barriers are breached, to prevent the pest from reaching explosive populations as has happened in the US.

“For the general public, it’s important to take care when visiting areas where the bug is a problem – such as the US and Eastern Asia – by checking luggage thoroughly before returning. People should also keep an eye out for potential specimens, particularly in the cooler autumn and winter months when the bug likes to enter homes.”

If you think you’ve found a Brown Marmorated Stink Bug, take a photo or collect a sample then report the find to MPI on 0800 80 99 66. 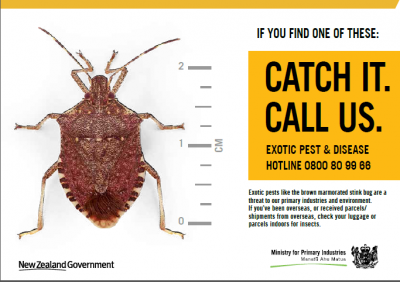