A small but significant ceremony was undertaken recently at the MPI diagnostics containment laboratory in Tāmaki Makaurau to recognise the repatriation of some samples of indigenous plant taonga from Aotearoa New Zealand trees growing in California USA.

This ceremony (known as a whakatau in this context), acknowledges the special connection people share with nature (whakapapa) and looks to express that connection according to a Māori worldview (Te Ao Māori).

The ceremony was held in a containment laboratory under strict biosecurity conditions on 7 April, 2022.

The whakatau reflects a small part of larger mahi looking at the pests and pathogens of New Zealand indigenous plants grown in botanic gardens in other countries.  These plants can be used as sentinels or guardians to help us understand which potentially invasive pests and pathogens pose a risk to our indigenous flora. These risk-species require extra care to prevent them from entering New Zealand

The whakatau represents a significant step by Better Border Biosecurity (B3) in recognising Te Ao Māori and integrating tikanga in its research programme.

In this particular example, plant samples from pōhutukawa, kauri, karaka and other species growing in California and suspected of being infested with the devastating plant pathogen, Xylella fastidiosa, are being studied to determine host plant pathogen relationships and to improve detection techniques.  Xylella fastidiosa is not present in Aotearoa New Zealand so any testing of plant material needs to be carried out under containment with strict biosecurity approvals.  The research is being undertaken as part of two B3 projects led by Ronny Groenteman and Sandra Visnovsky.

The ceremony consisted of an initial set of cultural protocols including initial Karakia (incantation), Mihimihi (acknowledgements), and Waiata (song) and Kai whakanoa (lunch) with a group from MPI and B3.  This was followed by further Karakia in the MPI PC2 laboratory in the presence of the descendants of Tāne (or plant samples) and Waiata performed later outside the containment laboratory.

The ceremony was led by MPI kaihautū: Waitai Petera, Kapiera Peita, Michelle Nahi and Waata Papali’i-Smith, hosted by MPI Plant Health and Environment Laboratory in Tamaki, Auckland, and included science leaders from MPI and B3.

B3 Director David Teulon, who was at the whakatau, said it was a very moving ceremony.  B3 Pourangahau Alby Marsh, says B3 is aiming to improve its understanding and appreciation of tikanga and use it to guide its path across the B3 research programme.  This ceremony was a small step in that direction. 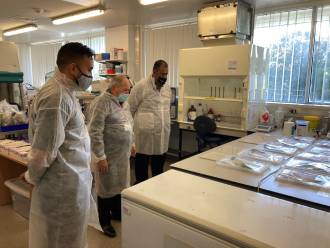 Karakia by MPI kaihautū (from left) Waata Papali’i-Smith, Waitai Petera, and Kapiera Peita in the presence of plant taonga. The repatriation ceremony was held in the MPI PHEL containment laboratory under strict biosecurity protocols.