Aotearoa New Zealand now has an additional border treatment option to manage the brown marmorated stink bug (BMSB) – a high risk/high profile pest that could decimate our agriculture and horticulture industries and become a smelly pest in homes if it enters the country.

From January 2022, all targeted ‘risk-good’ cargo entering Aotearoa New Zealand, including vehicles, machinery and cargo imported from BMSB countries in Europe, Japan, and the United States, can be fumigated with ethyl formate (EF) to kill any hidden BMSB.  Aotearoa New Zealand is the first country to approve EF to manage BMSB in imports at the border.

The Ministry of Primary Industry’s (MPI) scientific evidence-based approval of EF as a treatment option to kill BMSB is part of a recent focus from government, industry and Better Border Biosecurity (B3) on research in a number of different areas to prevent BMSB’s entry into Aotearoa New Zealand and mitigate its impact if it arrives.

BMSB has caused significant damage to nuts, row crops, tree fruit, and vegetables, in east-Asia, Eurasia, Europe, North America, and it has also been found in Chile.  It feeds on more than 300 plant species, and thousands of bugs can enter houses during winter and if disturbed create an unpleasant odour.

B3 Director Dr David Teulon says in 2017 B3 researchers began studying the potential for treating imports likely to contain BMSB with EF.  This involved collaboration with United States Department of Agriculture experts such as Dr Spencer Walse, catalyzed through a NZ USA Invasive Species Working Group workshop in August 2017. This work informed an extensive series of MPI-funded trials on EF (which is a ‘Generally Recognised As Safe’ treatment).  Tests were carried out in California, as BMSB is not present in New Zealand, and was co-managed by Plant and Food Research.  These laboratory studies found EF fumigation killed 99.9968% of overwintering and active adult BMSB. The recommended treatment schedule was adjusted slightly after being tested operationally in some containers. Dr Teulon says this a great example of MPI and B3 and its research partners working together to achieve important outcomes for Aotearoa New Zealand’s biosecurity system.

Mr Ken Glassey, MPI’s Senior Adviser, Treatments Team, says in late 2021 a decision was made to approve the use of EF against the BMSB after considering the scientific data.  “MPI requires mandatory treatment of a large range of risk goods in which BMSB could ‘hitchhike’ into the country,’’ he says. “Before the approval and addition of EF, the accepted treatment options for the BMSB were heat, SF, or MB.”

Mr Glassey says around 500 consignments a year are treated with MB.  Alternatives need  to be found due to MB’s ozone-depleting properties and the Montreal Protocol agreement that restricts its use internationally.

B3 is a cooperative science collaboration researching ways to reduce the entry and establishment of invasive plant pests, diseases and weeds into Aotearoa New Zealand.  B3 integrates investment and expertise from five research organisations – AgResearch, Manaaki Whenua Landcare Research, Plant & Food Research, Scion, and Lincoln University– and end-user partners–  including MPI, Department of Conservation, and industry. 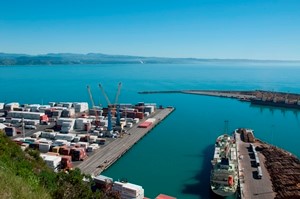