Twenty experts from South America, Africa, India, Canada and Europe met in Palmerston North recently to discuss advances in the sterile insect technique – a developing weapon against insect pests. The technique involves releasing large numbers of sterile insects into the environment, providing mates for the existing population but no offspring.

The technique is being developed for a range of pests, from sugar cane pests in South Africa to navel orange worm moths in California.

The working group is supported by the Joint Division of FAO and the International Atomic Energy Agency in Vienna, which coordinates global efforts in this area.

Local expert, and host for the meeting, Professor Max Suckling, Science Group Leader Biosecurity at Plant & Food Research and Better Border Biosecurity explains, “we release sterile insects that mate with the wild population, and their eggs are sterile so the pest numbers just crash.”

“In New Zealand, we are investigating this technique in a few isolated apple orchards, where sex pheromones are also being used to suppress pests, for example, as lures in traps.”

The meeting held a field trip to orchards where sterile codling moths have greatly reduced the wild strain of the pest, using insects released from unmanned aerial vehicles.

The International Area Wide and Sterile Insect Meeting is taking place in Palmerston North from the 12th March. 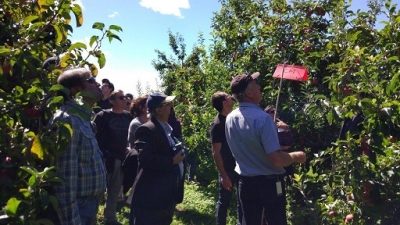