A number of B3’s scientists and collaborators were recognised at the end of 2021 for the impact they are having on Aotearoa New Zealand’s biosecurity system.

The Myrtle Rust Response Team, including many B3 researchers from a range of partners, was given the Plant and Food Research Science New Zealand Team Award for mahi ‘safeguarding the mauri of myrtles and dependent ecosystems’ since the pathogen was discovered in Aotearoa New Zealand in 2017. The team has also produced the largest portfolio of research internationally on myrtle rust.

B3 and its researchers were heavily involved in the initial response. B3 organised the first cross-sectorial science myrtle rust workshops, has mapped the ongoing incursion, and supported initial grant proposals and students.

View a video on the myrtle rust response project.

Details on all winners can be seen here.

The recognition reflects David’s outstanding leadership and championing of plant biosecurity research in Aotearoa New Zealand during a period of ever-increasing threats.

The Royal Society Te Apārangi said David has championed research and had an exemplary national and international impact, including during his tenure as Director of Better Border Biosecurity (B3).  In particular, he developed a highly-effective culture of science excellence and opportunities for co-innovative reinvestment to target emerging biosecurity threats. He also championed Māori involvement in B3 governance and leadership, and expanded the community of interest to include science, policy and industry partners.

Read more about David’s career and why the Royal Society Te Apārangi chose to make him part of the prestigious number of Ngā Takahoa a Te Apārangi Companions.

Winners of the Biosecurity Awards will be announced in February. Two of the three finalists in the Bioprotection Aotearoa Science Award section include B3 researchers. The nominees are:

Rebecca McDougal of Scion – Innovation and communication in forest biosecurity

Rebecca, who has led a number of innovative B3 research projects over the years, was recognised by the Forest Owners Association and the Forest Industry’s Biosecurity Committee for her outstanding contribution to the protection of the plantation forest estate.  Her contributions to diagnostic technology for pathogens have greatly advanced knowledge of some of the more serious pathogens that impact radiata pine and Douglas-fir.  She is not only a first-class scientist but also an excellent communicator and collaborator; able to communicate complex science issues to forest managers responsible for managing the health and protection of New Zealand’s forest.

DBRiEF is a biosecurity risk assessment framework developed by DairyNZ.  It examines and ranks the risks posed by exotic pathogens, pests, and weeds on the dairy industry – including risks to dairy cattle, pastures, and crops.  Outputs can be used to inform decisions for DairyNZ activities in GIA readiness and response, support biosecurity science, technical policy, and risk communication.

The project began in 2016 in collaboration with Dr Petra Muellner of Epi-Interactive and over the last five years have worked closely with AgResearch, Better Border Biosecurity (B3) (lead by Dr Craig Phillips), the New Zealand veterinary profession, GIA partners (including MPI) and academic institutions to support this work.

The full list of biosecurity award finalists can be found here. 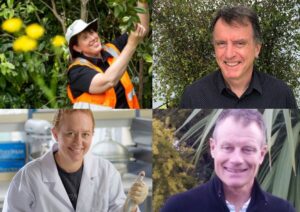