Determining the degree to which an insect species feeds on different plant species is a critical test for biosecurity. Such tests can help scientists understand the potential host range of exotic insects and therefore what impact the species could have on native and agricultural plants in New Zealand.

Measuring the feeding behaviour of chewing insects is relatively straightforward, because the damage they cause by feeding can be readily observed visually. In contrast, sap-sucking insects can be seen  to insert their mouth parts (stylets) into the plant tissue, but it is very difficult to ascertain estimates of the extent to which they may be feeding.

To overcome this problem, Manoharie Sandanayaka, a Scientist at Plant and Food Research, has been developing a method based on an Electrical Penetration Technique that instantaneously measures the feeding behaviour of sap-sucking insects. This creates an Electrical Penetration Graph (EPG) that logs real-time feeding and is far more efficient than current methods for measuring host plant acceptance. The EPG waveforms change through time and produce usefully meaningful data using only 25-30 individuals.

The insect feeding monitor (currently called EPG monitor) was developed in 1964 in the United States, where it was originally used for studying aphids. The technique has subsequently been applied around the world to a range of  other insects, thereby allowing scientists to measure host plant resistance, host plant range and pathogen transmission. In 1999, Sandanayaka was the first person in New Zealand to use the technique to complement a range of projects that required precise detection of sap-sucking insect behaviour.

EPGs are generated using  a very thin (10-20 micrometer diameter) gold wire, which acts as an electrode attached to the upper surface of the test insect using special conductive silver glue. The process must be done very accurately so as not to harm the insect. Sandanayaka says, “It is critical that perfect settings are achieved, because if the insect is damaged even slightly, the results will not apply to natural conditions.”

The insects are therefore wired under a microscope to enable scientists to precisely find the best location on the insect body to attach the wire. To perform the procedure, some of the “jumpier” insects have to be immobilised, using a tiny bit of carbon dioxide to anaesthetise them for just a minute or two while the wire is attached. The protocol for “wiring” each insect species is different depending on its morphology and behaviour, so a great deal of work is spent perfecting the right protocol for each species.

A small electrical current starts to flow through the insect itself when it pokes its feeding mouth-parts into the plant tissues. The EPG monitor measures changes in the electrical resistance associated with such probing and feeding. The stream of results gathered while this is occurring helps scientists to understand the stylet tip position within the plant tissues and the duration of feeding.

Sandanayaka receives support from an international group of EPG researchers that work on a range of other organisms. She says, “I am very happy with my progress and I am currently training two more people in the technique.”

Her focus is on organisms that are economically important to New Zealand, and she hopes to have developed the method for use by MAF officials in about 3 years. 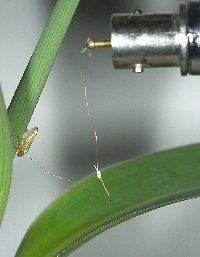