Throwing ants off the scent

Scientists at Plant & Food Research, B3 (Better Border Biosecurity) and the University of Auckland have been researching Argentine ants to determine how odour and physical cues help them to forage for food.

Argentine ants are heavily reliant on chemical cues such as odour trails for orientation and retrieving food, yet the behaviour of outdoor colonies suggests tactile features in their environment are also used to assist with foraging.

The Argentine ant is an invasive species that poses a risk to agriculture by competing with the food sources of other invertebrate species, such as pollinators. Understanding the ants’ ability to use physical cues helps researchers to determine how this ability might undermine pest control methods that involve using pheromones to disrupt the ants’ foraging behaviour.

“We’ve been researching the effects of applying synthetic pheromones to confuse the ants to prevent them from working together in harvesting resources,” says Plant & Food Research’s Science Group Leader, Professor Max Suckling.

“It’s a benign, targeted method for pest management whereby we can get the ants walking in circles instead of making their way back to their nest with your lunch.”

To understand the ants’ reliance on chemical and physical cues for orientation, the researchers took five Argentine ant colonies into the laboratory and conducted a range of experiments where string was used as a physical cue to determine the trail-following ability of the ants when subjected to different types, amounts and delivery of disruptive pheromones.

“Trail integrity eventually reduced under a continuous oversupply of trail pheromone delivered directly onto the string, but it was clear that the physical cue of the string did improve their trail following,” says Plant & Food Research Scientist Lloyd Stringer.

“The ants do not appear to switch from smell to physical cue orientation in the presence of an oversupply of trail disruption pheromones, but they do seem to recover quickly from an oversupply of pheromone when in clean air. This information should help with strategies for dealing with them in different environments in the wild.”

Now that it is known that odour detection is the primary means for navigation and that it can be can overwhelmed by adding excess trail pheromone, researchers can conduct additional experiments to determine if Argentine ants can employ other cues for orientation.

The research will contribute to finding long-term, sustainable methods for reducing nest stability.

The research has been published in the journal Scientific Reports. 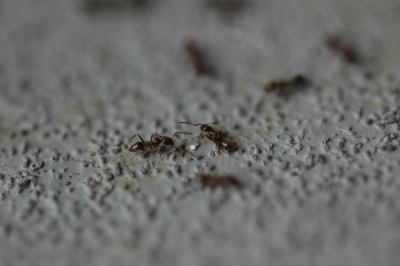