The brown marmorated stink bug (BMSB) is a highly damaging crop and fruit pest that originates from Eastern Asia but has now established in most of the US and some parts of Europe. Outbreaks in the US over the last 6 years have caused extensive damage to commercial fruit orchards there, and have many in New Zealand concerned about the insect’s potential establishment here.

BMSB has already been captured both dead and alive at the New Zealand border on vehicles, sea containers, air freight and passenger luggage. While every effort is being made to intercept these invaders, the border biosecurity community, including B3 scientists, are also being proactive in researching options if it does establish here, so that a response can be immediate and effective.

Biological control by natural enemies will be the most promising tactic able to provide ongoing sustainable population suppression across the insect’s varied habitats. A literature review by John Charles and colleagues from Plant & Food Research concluded that biocontrol by existing natural enemies in NZ is unlikely, but biocontrol by new natural enemies – especially the egg parasitoid Trissolcus japonicus – is likely to be effective.

The PFR team is now conducting a pre-emptive risk assessment to predict the environmental impact of T. japonicus before BMSB arrives in NZ. This is a unique approach because such testing is usually only conducted after a pest is established. It means that should BMSB establish here, biocontrol can be much more quickly implemented.

This work is being done collaboratively with colleagues in the US, especially Dr Kim Hoelmer (USDA ARS), who have supplied the parasitoids and recommended testing and rearing protocols based on their experiences. This collaboration has likely saved hundreds of thousands of dollars and advanced the project by as much as three years compared to starting from scratch. It is one of the outstanding successes of the MBIE-funded NZ US Invasive Species Working Group.

Catherine Duthie, Senior Adviser at the Ministry for Primary Industries says, “This research has the potential to deliver both short-term and long-term benefit. In the short term, release of the parasitoid may help us contain a newly detected population allowing for eradication attempt. In the long term, should BMSB establish throughout New Zealand, this parasitoid will be an essential part of integrated pest management.”

Industry has also been very supportive of the B3 research, and Barry O’Neil, Chief Executive of Kiwifruit Vine Health (KVH), says that KVH has been monitoring closely the significant impacts of BMSB on horticulture industries internationally, as well as actively participating in the research efforts to prepare for its possible arrival in NZ.

“While agreeing on the need for immediate eradication efforts if it is identified, we also realise the challenges that will be involved in successfully eradicating BMSB, and therefore fully support the work being done by B3 to assess biological control options that would be needed should BMSB establish in New Zealand.”

An oversight committee involving industry, government, and research representatives is being established, in order to ensure the necessary work and coordination is underway to be able to rapidly apply to EPA for approval to release a biological control agent for BMSB, should this be necessary.

“This is a really good example of all B3 partners (science, government and industry) working closely together on a high risk organism,” says B3 Director, David Teulon. 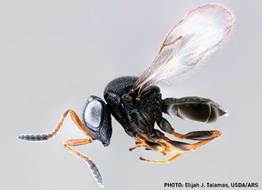