Professor Mumford’s research has covered many aspects of economic interest related to pest, food and biosecurity, including risk and economic analyses of exotic organisms, agricultural quarantine, invasive species and intentional releases/bioterrorism. He has also worked on risk analysis and economic analysis for novel technologies in pest control, such as the sterile insect technique and genetically modified insects.

During his visit to New Zealand, Professor Mumford participated in four events throughout the country. He says that these events highlighted that “a common issue facing biosecurity agencies everywhere is how to match uncertain management measures with uncertain pest challenges. It was good to see B3 stimulating interaction among the many institutions involved in biosecurity in New Zealand on how to deal with uncertainty in biosecurity risk assessments and risk management planning.”

The first event that Professor Mumford participated in was a workshop in Auckland on analysis for biosecurity risk, run by Lisa Jamieson (Plant & Food Research). The objectives for this workshop were: 1) to bring together risk analysis capabilities from around New Zealand and gain input from EU experience in control point risk analysis, and 2) to develop a conceptual model to analyse biosecurity risks to enable assessment of optimal points for intervention. Professor Mumford gave a presentation on his experience with the “Beyond Compliance” programme, which is funded by the Standards and Trade Development Facility at the World Trade Organisation, and developing a control point risk analysis model.

Second, Professor Mumford gave the keynote address for a symposium called Risk Analysis for Imports and Exports at the New Zealand Plant Protection Conference in Napier. This address focused on the development of quantitative pathway risk analyses as part of decision-making on acceptance and management of pest risk. The intention of this approach to quantitative pathway risk analysis is to describe the overall annual risk of an import pathway, but also to allow quantification on more local scales of time and space, ultimately to the risk posed by an individual consignment, or to an individual receptor location. This level of attention at each stage could, in effect, identify potential control points at which the challenge and the efficacy of management are measured.

Professor Mumford’s third event was a seminar at the Ministry for Primary Industries (MPI) in Wellington. Here Professor Mumford discussed analysis of pathway risks within a systems approach, with particular reference to dragonfruit from Vietnam.

Senior Advisor for Biosecurity at MPI, Jo Berry, said, “This discussion was timely for MPI staff as it provided valuable insights into the issues and obstacles in the effective application of production-system management of fruit pests in Southeast Asia. John also provided a number of potential solutions to these problems in Southeast Asia, both from a regional development perspective and the development of official compliance programmes between Southeast Asia and New Zealand.”

Professor Mumford commented that “the interest in New Zealand in mapping risk spatially is exciting to see, and this is likely to become an important part of area-wide management.” 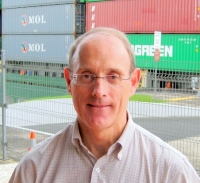