Building up Understanding of Xylella fastidiosa

Better Border Biosecurity (B3) has started work on a new five-year project looking at Xylella fastidiosa (Xf) and its New Zealand vectors. Xf is a serious invasive pathogen currently spreading through the world and is of serious concern for many NZ productive sectors as well as the natural estate.

This new project will look at the potential for NZ native and other insects to transmit Xf, and will work closely with the Xylella Action Group as well as exploring international research connections through Euphresco. It adds to an existing body of research on Xf already underway through the B3 collaboration. Currently Plant & Food Research is working with scientists at Manaaki Whenua Landcare Research and MPI to develop systems to predict the potential impact of Xf on Aotearoa New Zealand using a network of overseas botanical gardens and arboreta in areas where Xf is established and where plants from Aotearoa New Zealand are grown and can be examined for the presence of Xf and disease symptoms.

Alternative diagnostic tools are also being explored for the detection of Xf that may be adapted for screening new plant imports for MPI.

Xylella fastidiosa is a xylem-limited bacterium native to the Americas and has had a devastating impact on many crops internationally and is currently spreading rapidly throughout the world. It is not present in New Zealand. Many economically important horticultural, viticultural, agricultural and indigenous plant species including species considered taonga are considered likely to be susceptible to Xf. For the past few years, raised awareness of the potential destructive impact of Xf in New Zealand has led to a greater focus on the research required to prevent its establishment and reduce its potential impact in the country.

It is estimated that, should the disease establish in Aotearoa New Zealand, crops worth close to $400 million grow in areas highly suitable for Xf infection – including 20% of winegrape production and almost all citrus crops – with an additional $1.35 billion of horticultural industry value generated in areas classified as partially suitable. It is also anticipated that some of Aotearoa New Zealand’s unique native species, such as pōhutakawa and koromiko, may become infected with Xylella fastidiosa.

Other current B3 projects featuring work on Xylella fastidiosa: 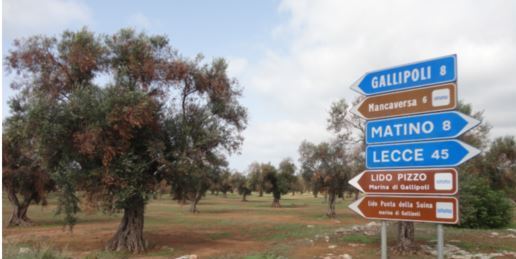